Home Uncategorised Dimitri’s voice snapped my attention back to him. “That’s Adrian Ivashkov.” He... 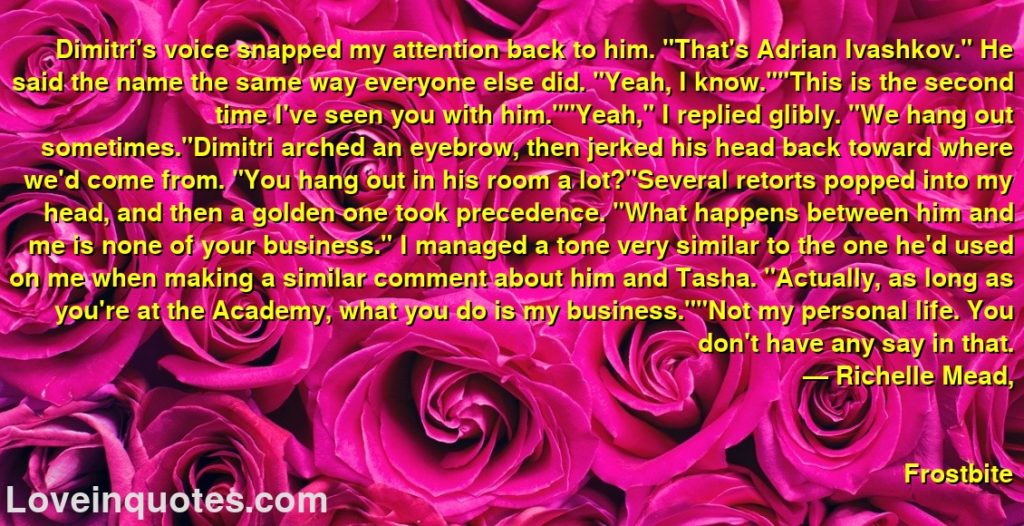 Dimitri’s voice snapped my attention back to him. “That’s Adrian Ivashkov.” He said the name the same way everyone else did. “Yeah, I know.””This is the second time I’ve seen you with him.””Yeah,” I replied glibly. “We hang out sometimes.”Dimitri arched an eyebrow, then jerked his head back toward where we’d come from. “You hang out in his room a lot?”Several retorts popped into my head, and then a golden one took precedence. “What happens between him and me is none of your business.” I managed a tone very similar to the one he’d used on me when making a similar comment about him and Tasha. “Actually, as long as you’re at the Academy, what you do is my business.””Not my personal life. You don’t have any say in that.
― Richelle Mead,

I hadn’t been out to the hives before, so to start off she gave me a lesson in what she called ‘bee yard etiquette’....

Life is like a game of chess.To win you have to make a move.Knowing which move to make comes with IN-SIGHTand knowledge, and by...

I might appear confident and chatty, but I spend most of my time laughing at jokes I don’t find funny, saying things I don’t...