Home LoveQuotes For years he had watched her skate and grow into her potential.... 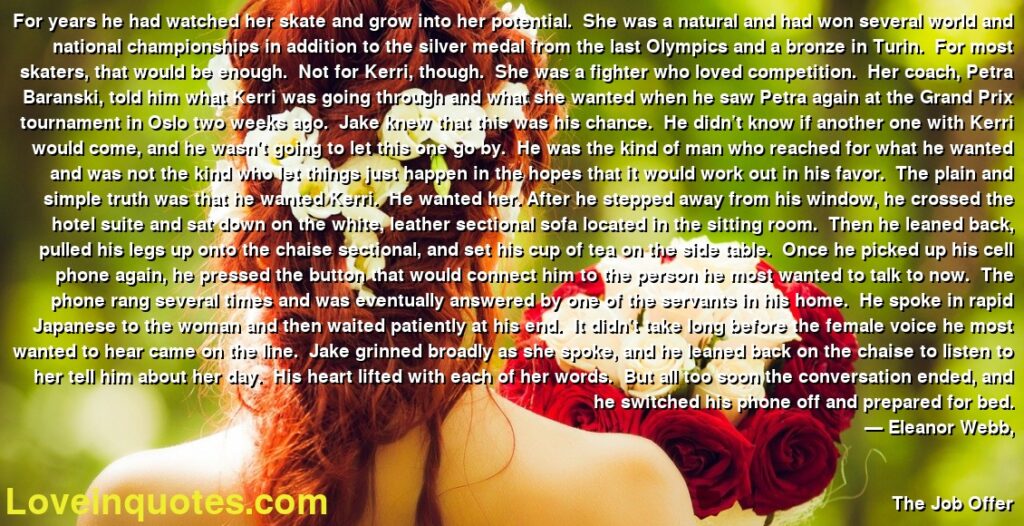 For years he had watched her skate and grow into her potential.  She was a natural and had won several world and national championships in addition to the silver medal from the last Olympics and a bronze in Turin.  For most skaters, that would be enough.  Not for Kerri, though.  She was a fighter who loved competition.  Her coach, Petra Baranski, told him what Kerri was going through and what she wanted when he saw Petra again at the Grand Prix tournament in Oslo two weeks ago.  Jake knew that this was his chance.  He didn’t know if another one with Kerri would come, and he wasn’t going to let this one go by.  He was the kind of man who reached for what he wanted and was not the kind who let things just happen in the hopes that it would work out in his favor.  The plain and simple truth was that he wanted Kerri.  He wanted her. After he stepped away from his window, he crossed the hotel suite and sat down on the white, leather sectional sofa located in the sitting room.  Then he leaned back, pulled his legs up onto the chaise sectional, and set his cup of tea on the side table.  Once he picked up his cell phone again, he pressed the button that would connect him to the person he most wanted to talk to now.  The phone rang several times and was eventually answered by one of the servants in his home.  He spoke in rapid Japanese to the woman and then waited patiently at his end.  It didn’t take long before the female voice he most wanted to hear came on the line.  Jake grinned broadly as she spoke, and he leaned back on the chaise to listen to her tell him about her day.  His heart lifted with each of her words.  But all too soon the conversation ended, and he switched his phone off and prepared for bed.
― Eleanor Webb,

And that, he sometimes felt, was why he loved being high so much: not because it offered an escape from everyday life, as so...

It isn’t only that he died, or how died; it is what he died believing. And so I try to be kind to everything...

And that, he sometimes felt, was why he loved being high...