Home LoveQuotes FURIOUS FAVOR I wonder if David would be allowed in our churches... 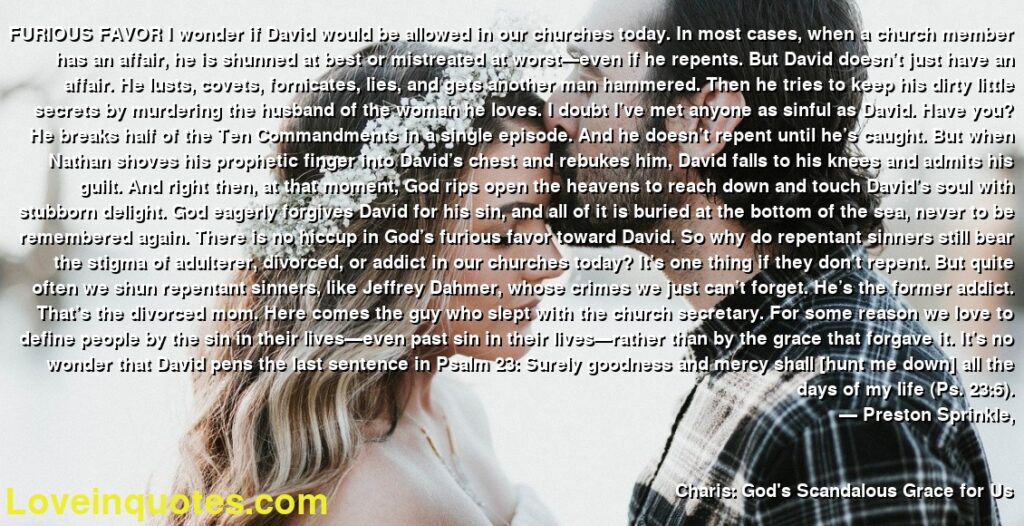 FURIOUS FAVOR I wonder if David would be allowed in our churches today. In most cases, when a church member has an affair, he is shunned at best or mistreated at worst—even if he repents. But David doesn’t just have an affair. He lusts, covets, fornicates, lies, and gets another man hammered. Then he tries to keep his dirty little secrets by murdering the husband of the woman he loves. I doubt I’ve met anyone as sinful as David. Have you? He breaks half of the Ten Commandments in a single episode. And he doesn’t repent until he’s caught. But when Nathan shoves his prophetic finger into David’s chest and rebukes him, David falls to his knees and admits his guilt. And right then, at that moment, God rips open the heavens to reach down and touch David’s soul with stubborn delight. God eagerly forgives David for his sin, and all of it is buried at the bottom of the sea, never to be remembered again. There is no hiccup in God’s furious favor toward David. So why do repentant sinners still bear the stigma of adulterer, divorced, or addict in our churches today? It’s one thing if they don’t repent. But quite often we shun repentant sinners, like Jeffrey Dahmer, whose crimes we just can’t forget. He’s the former addict. That’s the divorced mom. Here comes the guy who slept with the church secretary. For some reason we love to define people by the sin in their lives—even past sin in their lives—rather than by the grace that forgave it. It’s no wonder that David pens the last sentence in Psalm 23: Surely goodness and mercy shall [hunt me down] all the days of my life (Ps. 23:6).
― Preston Sprinkle,

Charis: God’s Scandalous Grace for Us

Bible tells us we have been forgiven much, so we must love much. Love means forgiveness, and forgiveness means you have to be open...

I love life … My son is the most precious to me. I will give up anything to be with my son at home...

Bible tells us we have been forgiven much, so we must...

I love life … My son is the most precious to...