Home LoveQuotes He’d always lived off by himself in a hut, keeping a small... 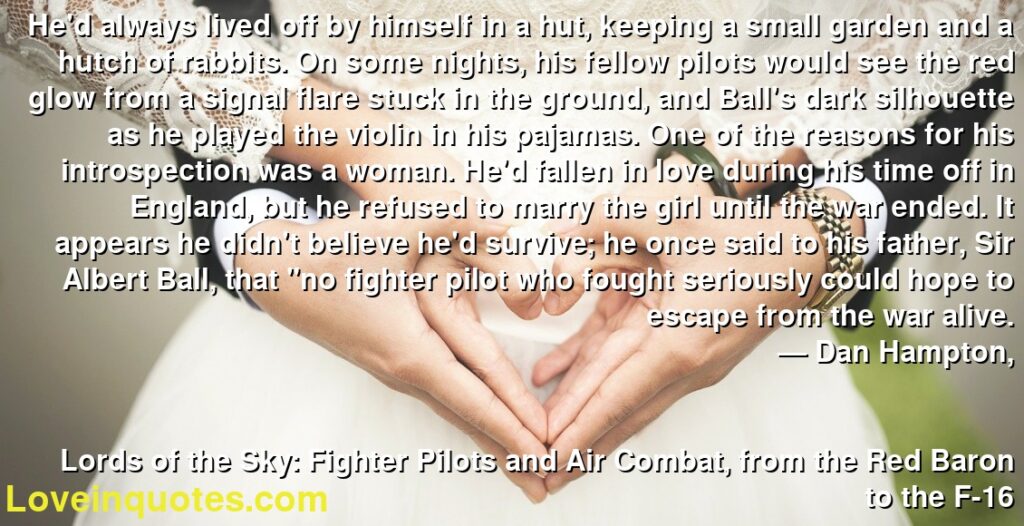 He’d always lived off by himself in a hut, keeping a small garden and a hutch of rabbits. On some nights, his fellow pilots would see the red glow from a signal flare stuck in the ground, and Ball’s dark silhouette as he played the violin in his pajamas. One of the reasons for his introspection was a woman. He’d fallen in love during his time off in England, but he refused to marry the girl until the war ended. It appears he didn’t believe he’d survive; he once said to his father, Sir Albert Ball, that “no fighter pilot who fought seriously could hope to escape from the war alive.
― Dan Hampton,

Lords of the Sky: Fighter Pilots and Air Combat, from the Red Baron to the F-16

Bible tells us we have been forgiven much, so we must love much. Love means forgiveness, and forgiveness means you have to be open...

I love life … My son is the most precious to me. I will give up anything to be with my son at home...

Bible tells us we have been forgiven much, so we must...

I love life … My son is the most precious to...