Home LoveQuotes I have another problem. Caleb’s grin was at once endearing and obnoxious.... 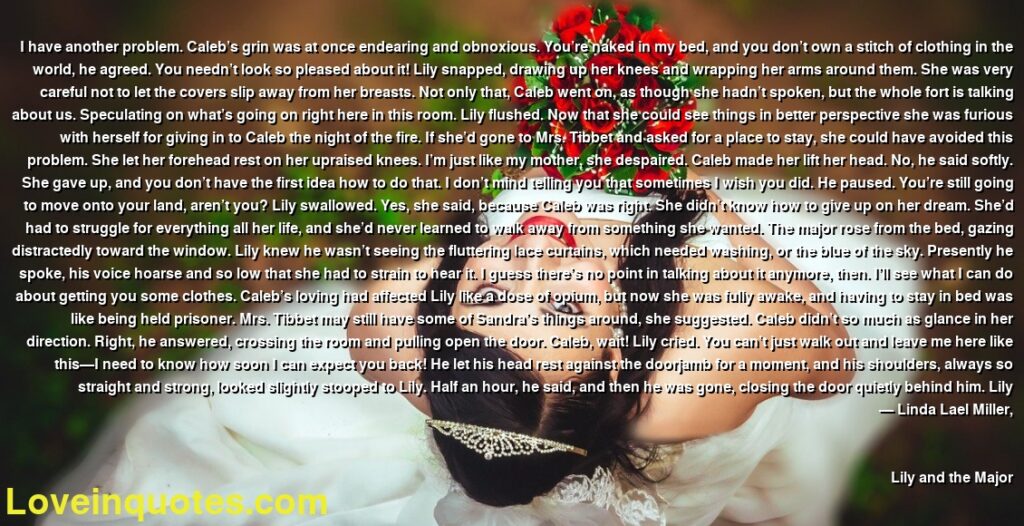 I have another problem. Caleb’s grin was at once endearing and obnoxious. You’re naked in my bed, and you don’t own a stitch of clothing in the world, he agreed. You needn’t look so pleased about it! Lily snapped, drawing up her knees and wrapping her arms around them. She was very careful not to let the covers slip away from her breasts. Not only that, Caleb went on, as though she hadn’t spoken, but the whole fort is talking about us. Speculating on what’s going on right here in this room. Lily flushed. Now that she could see things in better perspective she was furious with herself for giving in to Caleb the night of the fire. If she’d gone to Mrs. Tibbet and asked for a place to stay, she could have avoided this problem. She let her forehead rest on her upraised knees. I’m just like my mother, she despaired. Caleb made her lift her head. No, he said softly. She gave up, and you don’t have the first idea how to do that. I don’t mind telling you that sometimes I wish you did. He paused. You’re still going to move onto your land, aren’t you? Lily swallowed. Yes, she said, because Caleb was right. She didn’t know how to give up on her dream. She’d had to struggle for everything all her life, and she’d never learned to walk away from something she wanted. The major rose from the bed, gazing distractedly toward the window. Lily knew he wasn’t seeing the fluttering lace curtains, which needed washing, or the blue of the sky. Presently he spoke, his voice hoarse and so low that she had to strain to hear it. I guess there’s no point in talking about it anymore, then. I’ll see what I can do about getting you some clothes. Caleb’s loving had affected Lily like a dose of opium, but now she was fully awake, and having to stay in bed was like being held prisoner. Mrs. Tibbet may still have some of Sandra’s things around, she suggested. Caleb didn’t so much as glance in her direction. Right, he answered, crossing the room and pulling open the door. Caleb, wait! Lily cried. You can’t just walk out and leave me here like this—I need to know how soon I can expect you back! He let his head rest against the doorjamb for a moment, and his shoulders, always so straight and strong, looked slightly stooped to Lily. Half an hour, he said, and then he was gone, closing the door quietly behind him. Lily
― Linda Lael Miller,

Lily and the Major