Home LoveQuotes I hope I have now made it clear why I thought it... 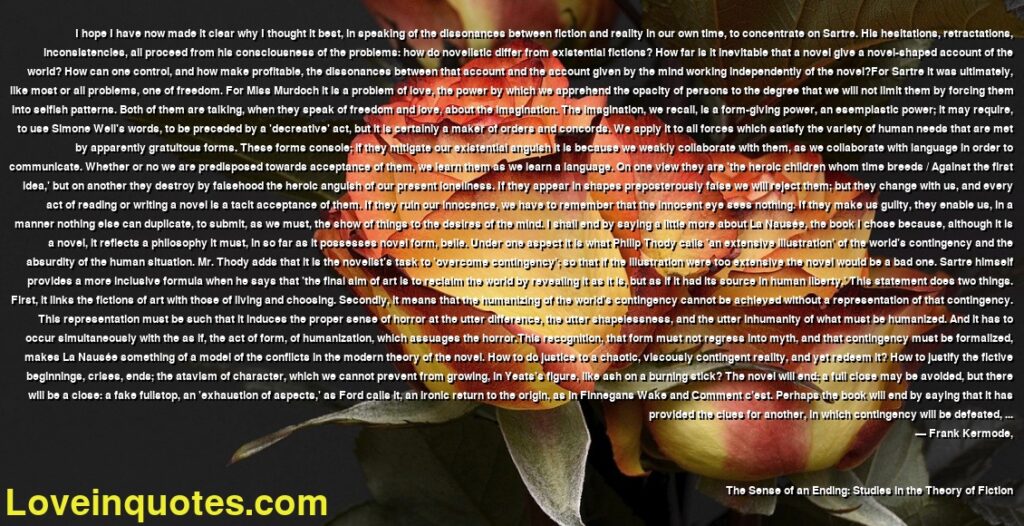 I hope I have now made it clear why I thought it best, in speaking of the dissonances between fiction and reality in our own time, to concentrate on Sartre. His hesitations, retractations, inconsistencies, all proceed from his consciousness of the problems: how do novelistic differ from existential fictions? How far is it inevitable that a novel give a novel-shaped account of the world? How can one control, and how make profitable, the dissonances between that account and the account given by the mind working independently of the novel?For Sartre it was ultimately, like most or all problems, one of freedom. For Miss Murdoch it is a problem of love, the power by which we apprehend the opacity of persons to the degree that we will not limit them by forcing them into selfish patterns. Both of them are talking, when they speak of freedom and love, about the imagination. The imagination, we recall, is a form-giving power, an esemplastic power; it may require, to use Simone Weil’s words, to be preceded by a ‘decreative’ act, but it is certainly a maker of orders and concords. We apply it to all forces which satisfy the variety of human needs that are met by apparently gratuitous forms. These forms console; if they mitigate our existential anguish it is because we weakly collaborate with them, as we collaborate with language in order to communicate. Whether or no we are predisposed towards acceptance of them, we learn them as we learn a language. On one view they are ‘the heroic children whom time breeds / Against the first idea,’ but on another they destroy by falsehood the heroic anguish of our present loneliness. If they appear in shapes preposterously false we will reject them; but they change with us, and every act of reading or writing a novel is a tacit acceptance of them. If they ruin our innocence, we have to remember that the innocent eye sees nothing. If they make us guilty, they enable us, in a manner nothing else can duplicate, to submit, as we must, the show of things to the desires of the mind. I shall end by saying a little more about La Nausée, the book I chose because, although it is a novel, it reflects a philosophy it must, in so far as it possesses novel form, belie. Under one aspect it is what Philip Thody calls ‘an extensive illustration’ of the world’s contingency and the absurdity of the human situation. Mr. Thody adds that it is the novelist’s task to ‘overcome contingency’; so that if the illustration were too extensive the novel would be a bad one. Sartre himself provides a more inclusive formula when he says that ‘the final aim of art is to reclaim the world by revealing it as it is, but as if it had its source in human liberty.’ This statement does two things. First, it links the fictions of art with those of living and choosing. Secondly, it means that the humanizing of the world’s contingency cannot be achieved without a representation of that contingency. This representation must be such that it induces the proper sense of horror at the utter difference, the utter shapelessness, and the utter inhumanity of what must be humanized. And it has to occur simultaneously with the as if, the act of form, of humanization, which assuages the horror.This recognition, that form must not regress into myth, and that contingency must be formalized, makes La Nausée something of a model of the conflicts in the modern theory of the novel. How to do justice to a chaotic, viscously contingent reality, and yet redeem it? How to justify the fictive beginnings, crises, ends; the atavism of character, which we cannot prevent from growing, in Yeats’s figure, like ash on a burning stick? The novel will end; a full close may be avoided, but there will be a close: a fake fullstop, an ‘exhaustion of aspects,’ as Ford calls it, an ironic return to the origin, as in Finnegans Wake and Comment c’est. Perhaps the book will end by saying that it has provided the clues for another, in which contingency will be defeated, …
― Frank Kermode,

The Sense of an Ending: Studies in the Theory of Fiction

Maybe that apparent ease was what made their unions burn so bright from the outside looking in. Maybe that kind of love wasn’t simple....

I don’t want to live in a world where everything that I say, everything I do, everyone I talk to, every expression of creativity...

CageIt’s a tear i want to shed,For the weathered roses that once was red,Today it’s a decision want to make,To move on in life...

Maybe that apparent ease was what made their unions burn so...

I don’t want to live in a world where everything that...

CageIt’s a tear i want to shed,For the weathered roses that...