Home LoveQuotes I never tried to accuse you for my mistake. If you’re saying... 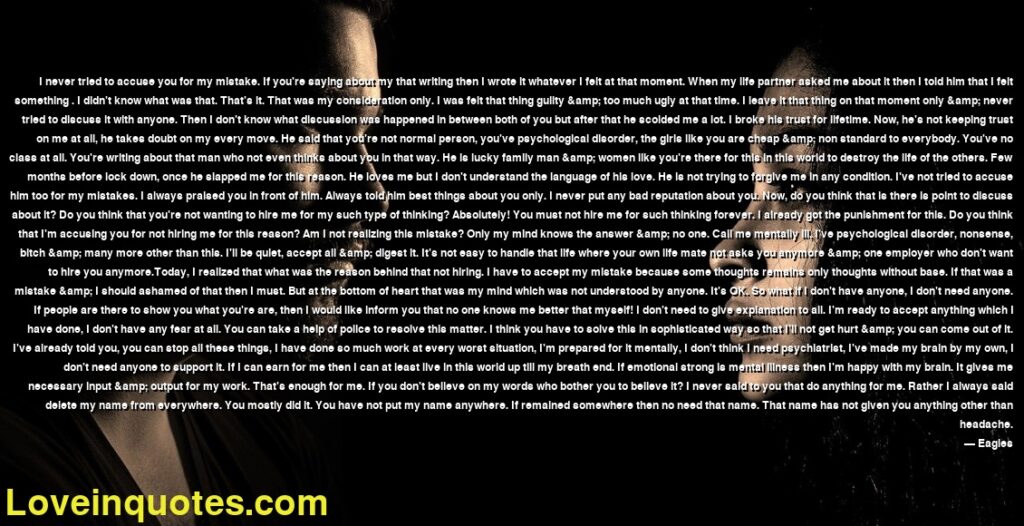 I never tried to accuse you for my mistake. If you’re saying about my that writing then I wrote it whatever I felt at that moment. When my life partner asked me about it then I told him that I felt something . I didn’t know what was that. That’s it. That was my consideration only. I was felt that thing guilty & too much ugly at that time. I leave it that thing on that moment only & never tried to discuss it with anyone. Then I don’t know what discussion was happened in between both of you but after that he scolded me a lot. I broke his trust for lifetime. Now, he’s not keeping trust on me at all, he takes doubt on my every move. He said that you’re not normal person, you’ve psychological disorder, the girls like you are cheap & non standard to everybody. You’ve no class at all. You’re writing about that man who not even thinks about you in that way. He is lucky family man & women like you’re there for this in this world to destroy the life of the others. Few months before lock down, once he slapped me for this reason. He loves me but I don’t understand the language of his love. He is not trying to forgive me in any condition. I’ve not tried to accuse him too for my mistakes. I always praised you in front of him. Always told him best things about you only. I never put any bad reputation about you. Now, do you think that is there is point to discuss about it? Do you think that you’re not wanting to hire me for my such type of thinking? Absolutely! You must not hire me for such thinking forever. I already got the punishment for this. Do you think that I’m accusing you for not hiring me for this reason? Am I not realizing this mistake? Only my mind knows the answer & no one. Call me mentally ill, I’ve psychological disorder, nonsense, bitch & many more other than this. I’ll be quiet, accept all & digest it. It’s not easy to handle that life where your own life mate not asks you anymore & one employer who don’t want to hire you anymore.Today, I realized that what was the reason behind that not hiring. I have to accept my mistake because some thoughts remains only thoughts without base. If that was a mistake & I should ashamed of that then I must. But at the bottom of heart that was my mind which was not understood by anyone. It’s OK. So what if I don’t have anyone, I don’t need anyone. If people are there to show you what you’re are, then I would like inform you that no one knows me better that myself! I don’t need to give explanation to all. I’m ready to accept anything which I have done, I don’t have any fear at all. You can take a help of police to resolve this matter. I think you have to solve this in sophisticated way so that I’ll not get hurt & you can come out of it. I’ve already told you, you can stop all these things, I have done so much work at every worst situation, I’m prepared for it mentally, I don’t think I need psychiatrist, I’ve made my brain by my own, I don’t need anyone to support it. If I can earn for me then I can at least live in this world up till my breath end. If emotional strong is mental illness then I’m happy with my brain. It gives me necessary input & output for my work. That’s enough for me. If you don’t believe on my words who bother you to believe it? I never said to you that do anything for me. Rather I always said delete my name from everywhere. You mostly did it. You have not put my name anywhere. If remained somewhere then no need that name. That name has not given you anything other than headache.
― Eagles

On a wall of her burial chamber, Ramesses summed up his love for her as such: “My love is unique and none can rival...

I had played all my angles, tossed my heart with a wet rattling thump onto her snare drum, I Love You I Love You...

After returning home from a long day at work, start your evening off with your spouse (the second you walk through the door) with...

On a wall of her burial chamber, Ramesses summed up his...

I had played all my angles, tossed my heart with a...

After returning home from a long day at work, start your...