Home LoveQuotes In Shushan the citadel there was a certain Jew whose name was... 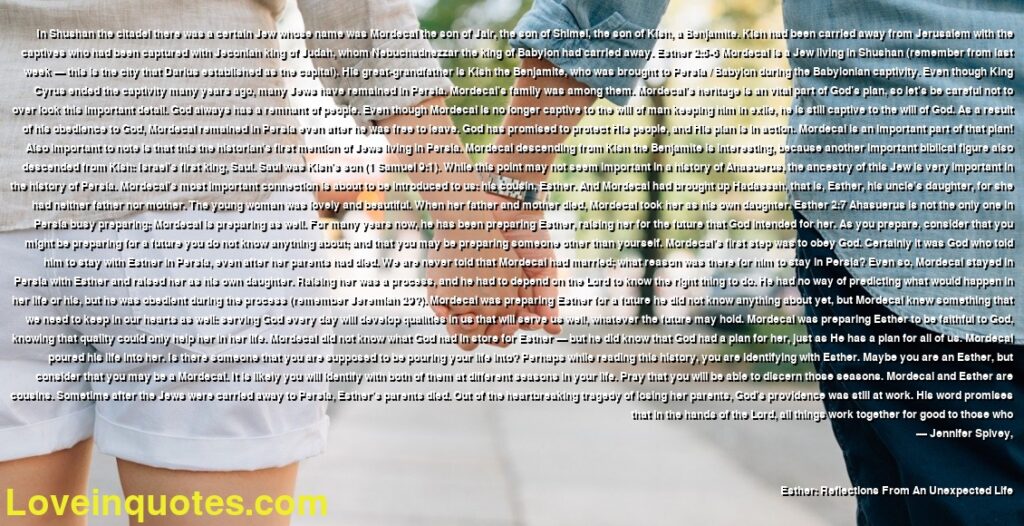 In Shushan the citadel there was a certain Jew whose name was Mordecai the son of Jair, the son of Shimei, the son of Kish, a Benjamite. Kish had been carried away from Jerusalem with the captives who had been captured with Jeconiah king of Judah, whom Nebuchadnezzar the king of Babylon had carried away. Esther 2:5-6 Mordecai is a Jew living in Shushan (remember from last week — this is the city that Darius established as the capital). His great-grandfather is Kish the Benjamite, who was brought to Persia / Babylon during the Babylonian captivity. Even though King Cyrus ended the captivity many years ago, many Jews have remained in Persia. Mordecai’s family was among them. Mordecai’s heritage is an vital part of God’s plan, so let’s be careful not to over look this important detail. God always has a remnant of people. Even though Mordecai is no longer captive to the will of man keeping him in exile, he is still captive to the will of God. As a result of his obedience to God, Mordecai remained in Persia even after he was free to leave. God has promised to protect His people, and His plan is in action. Mordecai is an important part of that plan! Also important to note is that this the historian’s first mention of Jews living in Persia. Mordecai descending from Kish the Benjamite is interesting, because another important biblical figure also descended from Kish: Israel’s first king, Saul. Saul was Kish’s son (1 Samuel 9:1). While this point may not seem important in a history of Ahasuerus, the ancestry of this Jew is very important in the history of Persia. Mordecai’s most important connection is about to be introduced to us: his cousin, Esther. And Mordecai had brought up Hadassah, that is, Esther, his uncle’s daughter, for she had neither father nor mother. The young woman was lovely and beautiful. When her father and mother died, Mordecai took her as his own daughter. Esther 2:7 Ahasuerus is not the only one in Persia busy preparing; Mordecai is preparing as well. For many years now, he has been preparing Esther, raising her for the future that God intended for her. As you prepare, consider that you might be preparing for a future you do not know anything about; and that you may be preparing someone other than yourself. Mordecai’s first step was to obey God. Certainly it was God who told him to stay with Esther in Persia, even after her parents had died. We are never told that Mordecai had married; what reason was there for him to stay in Persia? Even so, Mordecai stayed in Persia with Esther and raised her as his own daughter. Raising her was a process, and he had to depend on the Lord to know the right thing to do. He had no way of predicting what would happen in her life or his, but he was obedient during the process (remember Jeremiah 29?). Mordecai was preparing Esther for a future he did not know anything about yet, but Mordecai knew something that we need to keep in our hearts as well: serving God every day will develop qualities in us that will serve us well, whatever the future may hold. Mordecai was preparing Esther to be faithful to God, knowing that quality could only help her in her life. Mordecai did not know what God had in store for Esther — but he did know that God had a plan for her, just as He has a plan for all of us. Mordecai poured his life into her. Is there someone that you are supposed to be pouring your life into? Perhaps while reading this history, you are identifying with Esther. Maybe you are an Esther, but consider that you may be a Mordecai. It is likely you will identify with both of them at different seasons in your life. Pray that you will be able to discern those seasons. Mordecai and Esther are cousins. Sometime after the Jews were carried away to Persia, Esther’s parents died. Out of the heartbreaking tragedy of losing her parents, God’s providence was still at work. His word promises that in the hands of the Lord, all things work together for good to those who
― Jennifer Spivey,

Esther: Reflections From An Unexpected Life

Optimistic, because even though the year of Obama’s birth Herbert Lee, a black farmer with nine children, was shot in the head for trying...

Maybe … sometimes people don’t see the things they do as wrong, but they can see the wrong in what other people do –...

I think that the individual cannot exist in a vacuum. Cannot...

Optimistic, because even though the year of Obama’s birth Herbert Lee,...

Maybe … sometimes people don’t see the things they do as...