Home LoveQuotes It isn’t really possible for men to understand how much the world... 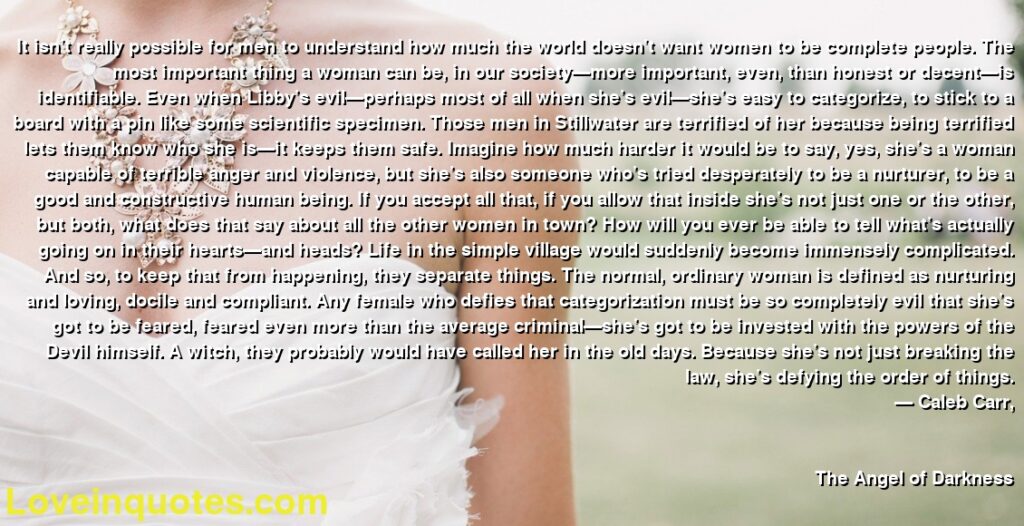 It isn’t really possible for men to understand how much the world doesn’t want women to be complete people. The most important thing a woman can be, in our society—more important, even, than honest or decent—is identifiable. Even when Libby’s evil—perhaps most of all when she’s evil—she’s easy to categorize, to stick to a board with a pin like some scientific specimen. Those men in Stillwater are terrified of her because being terrified lets them know who she is—it keeps them safe. Imagine how much harder it would be to say, yes, she’s a woman capable of terrible anger and violence, but she’s also someone who’s tried desperately to be a nurturer, to be a good and constructive human being. If you accept all that, if you allow that inside she’s not just one or the other, but both, what does that say about all the other women in town? How will you ever be able to tell what’s actually going on in their hearts—and heads? Life in the simple village would suddenly become immensely complicated. And so, to keep that from happening, they separate things. The normal, ordinary woman is defined as nurturing and loving, docile and compliant. Any female who defies that categorization must be so completely evil that she’s got to be feared, feared even more than the average criminal—she’s got to be invested with the powers of the Devil himself. A witch, they probably would have called her in the old days. Because she’s not just breaking the law, she’s defying the order of things.
― Caleb Carr,

The Angel of Darkness