Home LoveQuotes Jill had, as you might say, quite fall in love with the... 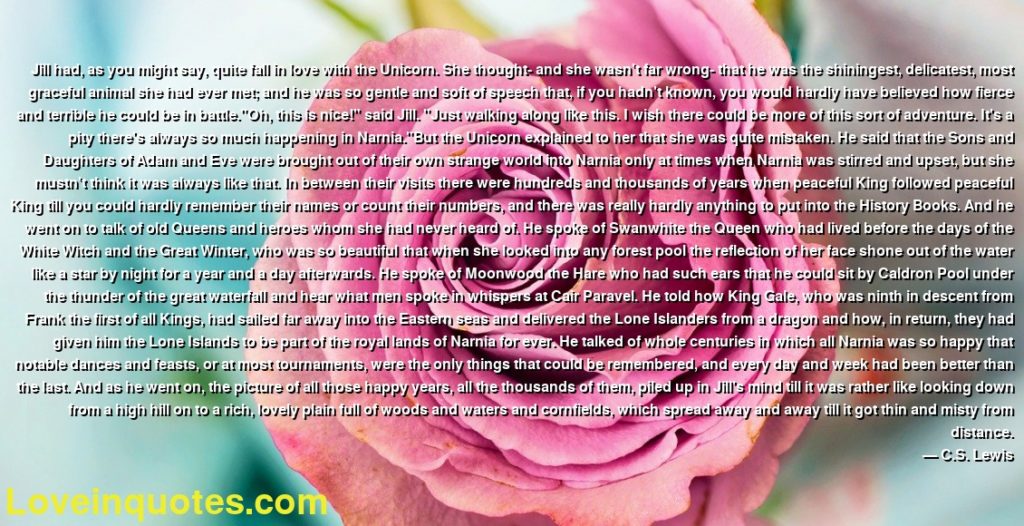 Jill had, as you might say, quite fall in love with the Unicorn. She thought- and she wasn’t far wrong- that he was the shiningest, delicatest, most graceful animal she had ever met; and he was so gentle and soft of speech that, if you hadn’t known, you would hardly have believed how fierce and terrible he could be in battle.”Oh, this is nice!” said Jill. “Just walking along like this. I wish there could be more of this sort of adventure. It’s a pity there’s always so much happening in Narnia.”But the Unicorn explained to her that she was quite mistaken. He said that the Sons and Daughters of Adam and Eve were brought out of their own strange world into Narnia only at times when Narnia was stirred and upset, but she mustn’t think it was always like that. In between their visits there were hundreds and thousands of years when peaceful King followed peaceful King till you could hardly remember their names or count their numbers, and there was really hardly anything to put into the History Books. And he went on to talk of old Queens and heroes whom she had never heard of. He spoke of Swanwhite the Queen who had lived before the days of the White Witch and the Great Winter, who was so beautiful that when she looked into any forest pool the reflection of her face shone out of the water like a star by night for a year and a day afterwards. He spoke of Moonwood the Hare who had such ears that he could sit by Caldron Pool under the thunder of the great waterfall and hear what men spoke in whispers at Cair Paravel. He told how King Gale, who was ninth in descent from Frank the first of all Kings, had sailed far away into the Eastern seas and delivered the Lone Islanders from a dragon and how, in return, they had given him the Lone Islands to be part of the royal lands of Narnia for ever. He talked of whole centuries in which all Narnia was so happy that notable dances and feasts, or at most tournaments, were the only things that could be remembered, and every day and week had been better than the last. And as he went on, the picture of all those happy years, all the thousands of them, piled up in Jill’s mind till it was rather like looking down from a high hill on to a rich, lovely plain full of woods and waters and cornfields, which spread away and away till it got thin and misty from distance.
― C.S. Lewis

You were my first love, my only love, and you’ll be my last. Till the end of time, I’ll be yours forever. ...

Sometimes the heart didn’t have boundaries; emotions and individual feelings were complex, not binary. Love wasn’t one thing or another, gay or straight, black...

You were my first love, my only love, and you’ll be...

Sometimes the heart didn’t have boundaries; emotions and individual feelings were...