Home LoveQuotes Patriotism has then, many faces. Those who would reject it entirely do... 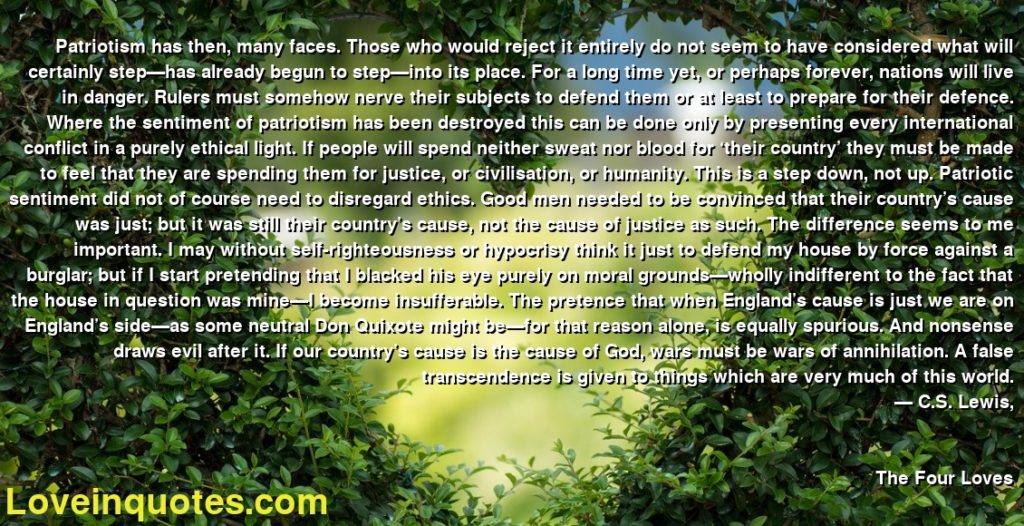 Patriotism has then, many faces. Those who would reject it entirely do not seem to have considered what will certainly step—has already begun to step—into its place. For a long time yet, or perhaps forever, nations will live in danger. Rulers must somehow nerve their subjects to defend them or at least to prepare for their defence. Where the sentiment of patriotism has been destroyed this can be done only by presenting every international conflict in a purely ethical light. If people will spend neither sweat nor blood for ‘their country’ they must be made to feel that they are spending them for justice, or civilisation, or humanity. This is a step down, not up. Patriotic sentiment did not of course need to disregard ethics. Good men needed to be convinced that their country’s cause was just; but it was still their country’s cause, not the cause of justice as such. The difference seems to me important. I may without self-righteousness or hypocrisy think it just to defend my house by force against a burglar; but if I start pretending that I blacked his eye purely on moral grounds—wholly indifferent to the fact that the house in question was mine—I become insufferable. The pretence that when England’s cause is just we are on England’s side—as some neutral Don Quixote might be—for that reason alone, is equally spurious. And nonsense draws evil after it. If our country’s cause is the cause of God, wars must be wars of annihilation. A false transcendence is given to things which are very much of this world.
― C.S. Lewis,

Every day, your first thought is not I love him but How is he? The world, overnight, rearranges itself into an obstacle course of...

they both knew they could simply refuse if they really wanted to, and they both rarely did – after all, where else would they...

You have never known fear until you have a child, and maybe that is what tricks us into thinking that it is more magnificent,...

Every day, your first thought is not I love him but...

they both knew they could simply refuse if they really wanted...

You have never known fear until you have a child, and...