Home LoveQuotes Sometimes family hurts you more than they could ever love you. That’s... 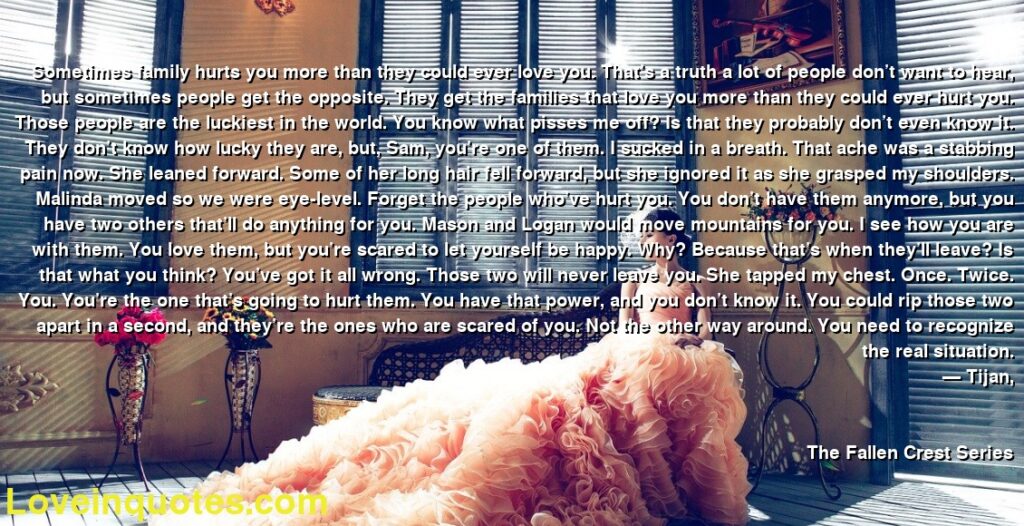 Sometimes family hurts you more than they could ever love you. That’s a truth a lot of people don’t want to hear, but sometimes people get the opposite. They get the families that love you more than they could ever hurt you. Those people are the luckiest in the world. You know what pisses me off? Is that they probably don’t even know it. They don’t know how lucky they are, but, Sam, you’re one of them. I sucked in a breath. That ache was a stabbing pain now. She leaned forward. Some of her long hair fell forward, but she ignored it as she grasped my shoulders. Malinda moved so we were eye-level. Forget the people who’ve hurt you. You don’t have them anymore, but you have two others that’ll do anything for you. Mason and Logan would move mountains for you. I see how you are with them. You love them, but you’re scared to let yourself be happy. Why? Because that’s when they’ll leave? Is that what you think? You’ve got it all wrong. Those two will never leave you. She tapped my chest. Once. Twice. You. You’re the one that’s going to hurt them. You have that power, and you don’t know it. You could rip those two apart in a second, and they’re the ones who are scared of you. Not the other way around. You need to recognize the real situation.
― Tijan,

Why is my love for you, dyed in wool?What is the hindrance to moving on?Why in love have I been made a fool?What’s been...

These fragments, these shivers of my heartAre mere lifetimes enclosed in a minute ― Zubair Ahsan, ...

Love doesn’t need consent or someone’s approval. It is as inevitable as life and death. ― Samreen Ahsan, ...