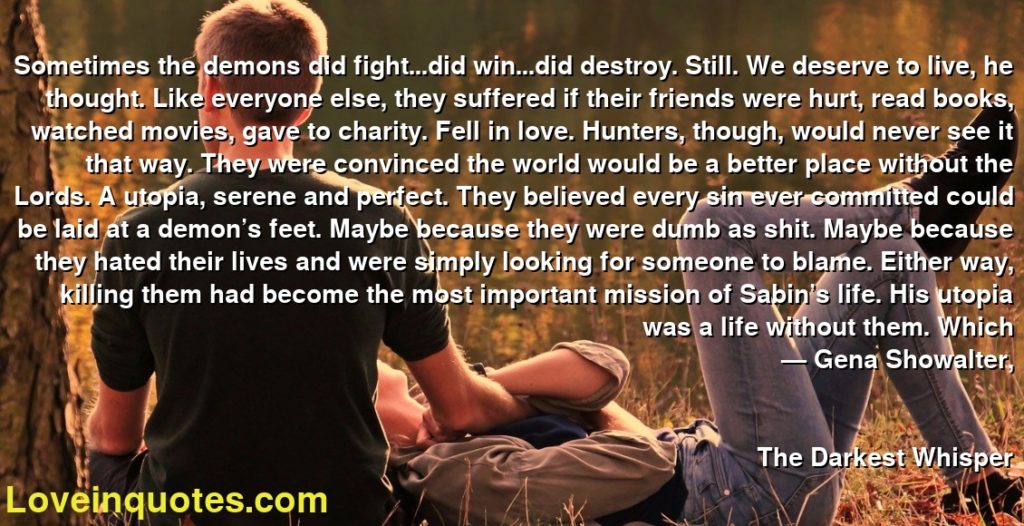 Sometimes the demons did fight…did win…did destroy. Still. We deserve to live, he thought. Like everyone else, they suffered if their friends were hurt, read books, watched movies, gave to charity. Fell in love. Hunters, though, would never see it that way. They were convinced the world would be a better place without the Lords. A utopia, serene and perfect. They believed every sin ever committed could be laid at a demon’s feet. Maybe because they were dumb as shit. Maybe because they hated their lives and were simply looking for someone to blame. Either way, killing them had become the most important mission of Sabin’s life. His utopia was a life without them. Which
― Gena Showalter,

You have never known fear until you have a child, and maybe that is what tricks us into thinking that it is more magnificent,...

No, Willem said, after they’d all stopped laughing. I know my life’s meaningful because—and here he stopped, and looked shy, and was silent for...

You have never known fear until you have a child, and...

No, Willem said, after they’d all stopped laughing. I know my...