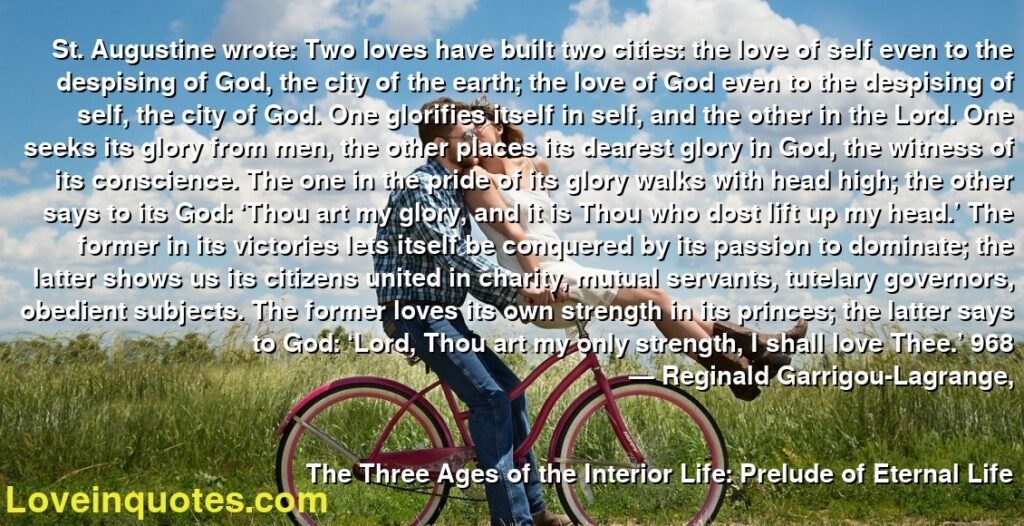 St. Augustine wrote: Two loves have built two cities: the love of self even to the despising of God, the city of the earth; the love of God even to the despising of self, the city of God. One glorifies itself in self, and the other in the Lord. One seeks its glory from men, the other places its dearest glory in God, the witness of its conscience. The one in the pride of its glory walks with head high; the other says to its God: ‘Thou art my glory, and it is Thou who dost lift up my head.’ The former in its victories lets itself be conquered by its passion to dominate; the latter shows us its citizens united in charity, mutual servants, tutelary governors, obedient subjects. The former loves its own strength in its princes; the latter says to God: ‘Lord, Thou art my only strength, I shall love Thee.’ 968
― Reginald Garrigou-Lagrange,

The Three Ages of the Interior Life: Prelude of Eternal Life

It is natural indeed. However it’s not the only thing God has in mind for us. We are not meant to live merely by...

Nathaniel opened one gray eye, startlingly pale against his soot- and blood-covered face. He looked around dubiously, as though he wasn’t quite sure whether...

Surrendering yourself, or the idea of it can be daunting to codependents because they come from a place of neglect and abuse. But, on...

It is natural indeed. However it’s not the only thing God...

Nathaniel opened one gray eye, startlingly pale against his soot- and...

Surrendering yourself, or the idea of it can be daunting to...