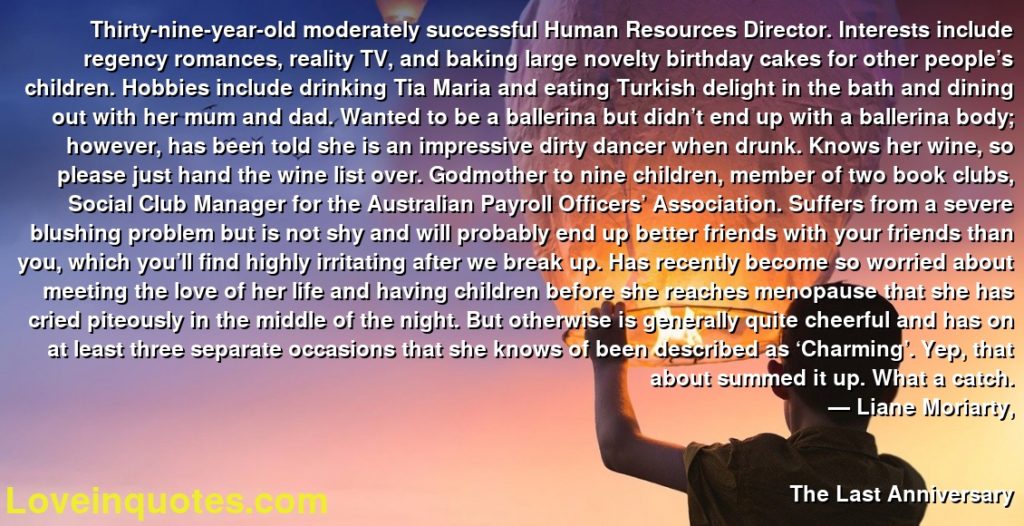 Thirty-nine-year-old moderately successful Human Resources Director. Interests include regency romances, reality TV, and baking large novelty birthday cakes for other people’s children. Hobbies include drinking Tia Maria and eating Turkish delight in the bath and dining out with her mum and dad. Wanted to be a ballerina but didn’t end up with a ballerina body; however, has been told she is an impressive dirty dancer when drunk. Knows her wine, so please just hand the wine list over. Godmother to nine children, member of two book clubs, Social Club Manager for the Australian Payroll Officers’ Association. Suffers from a severe blushing problem but is not shy and will probably end up better friends with your friends than you, which you’ll find highly irritating after we break up. Has recently become so worried about meeting the love of her life and having children before she reaches menopause that she has cried piteously in the middle of the night. But otherwise is generally quite cheerful and has on at least three separate occasions that she knows of been described as ‘Charming’. Yep, that about summed it up. What a catch.
― Liane Moriarty,