Home LoveQuotes this same love for her own people, and her desire to establish... 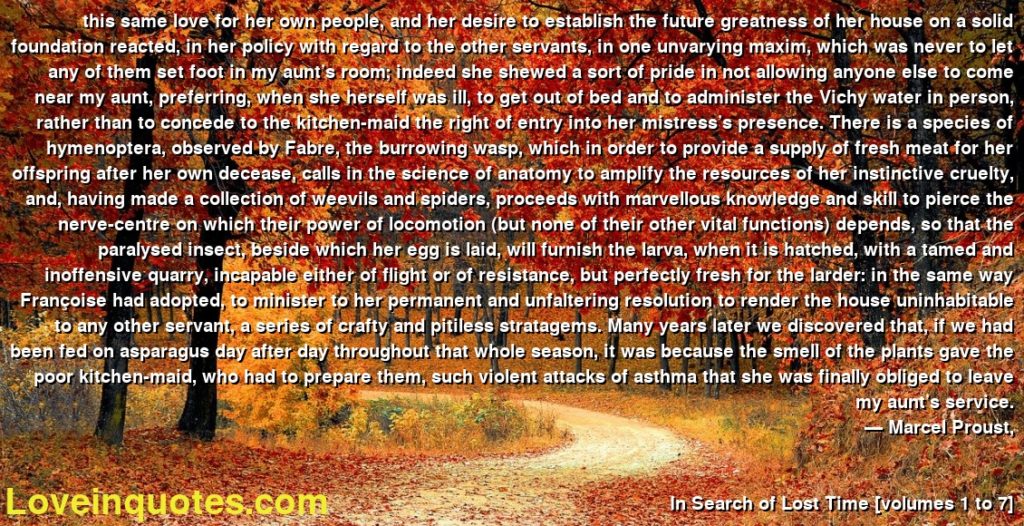 this same love for her own people, and her desire to establish the future greatness of her house on a solid foundation reacted, in her policy with regard to the other servants, in one unvarying maxim, which was never to let any of them set foot in my aunt’s room; indeed she shewed a sort of pride in not allowing anyone else to come near my aunt, preferring, when she herself was ill, to get out of bed and to administer the Vichy water in person, rather than to concede to the kitchen-maid the right of entry into her mistress’s presence. There is a species of hymenoptera, observed by Fabre, the burrowing wasp, which in order to provide a supply of fresh meat for her offspring after her own decease, calls in the science of anatomy to amplify the resources of her instinctive cruelty, and, having made a collection of weevils and spiders, proceeds with marvellous knowledge and skill to pierce the nerve-centre on which their power of locomotion (but none of their other vital functions) depends, so that the paralysed insect, beside which her egg is laid, will furnish the larva, when it is hatched, with a tamed and inoffensive quarry, incapable either of flight or of resistance, but perfectly fresh for the larder: in the same way Françoise had adopted, to minister to her permanent and unfaltering resolution to render the house uninhabitable to any other servant, a series of crafty and pitiless stratagems. Many years later we discovered that, if we had been fed on asparagus day after day throughout that whole season, it was because the smell of the plants gave the poor kitchen-maid, who had to prepare them, such violent attacks of asthma that she was finally obliged to leave my aunt’s service.
― Marcel Proust,