Home LoveQuotes What are you saying? We’re having a nice time, ain’t we?’ Howard... 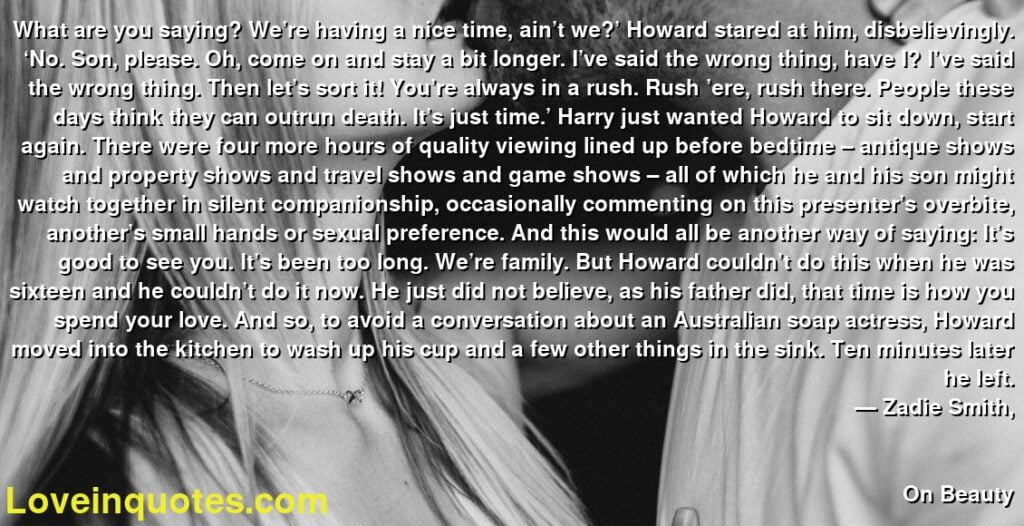 What are you saying? We’re having a nice time, ain’t we?’ Howard stared at him, disbelievingly. ‘No. Son, please. Oh, come on and stay a bit longer. I’ve said the wrong thing, have I? I’ve said the wrong thing. Then let’s sort it! You’re always in a rush. Rush ’ere, rush there. People these days think they can outrun death. It’s just time.’ Harry just wanted Howard to sit down, start again. There were four more hours of quality viewing lined up before bedtime – antique shows and property shows and travel shows and game shows – all of which he and his son might watch together in silent companionship, occasionally commenting on this presenter’s overbite, another’s small hands or sexual preference. And this would all be another way of saying: It’s good to see you. It’s been too long. We’re family. But Howard couldn’t do this when he was sixteen and he couldn’t do it now. He just did not believe, as his father did, that time is how you spend your love. And so, to avoid a conversation about an Australian soap actress, Howard moved into the kitchen to wash up his cup and a few other things in the sink. Ten minutes later he left.
― Zadie Smith,