Home LoveQuotes When I go to New York City, I do not have to... 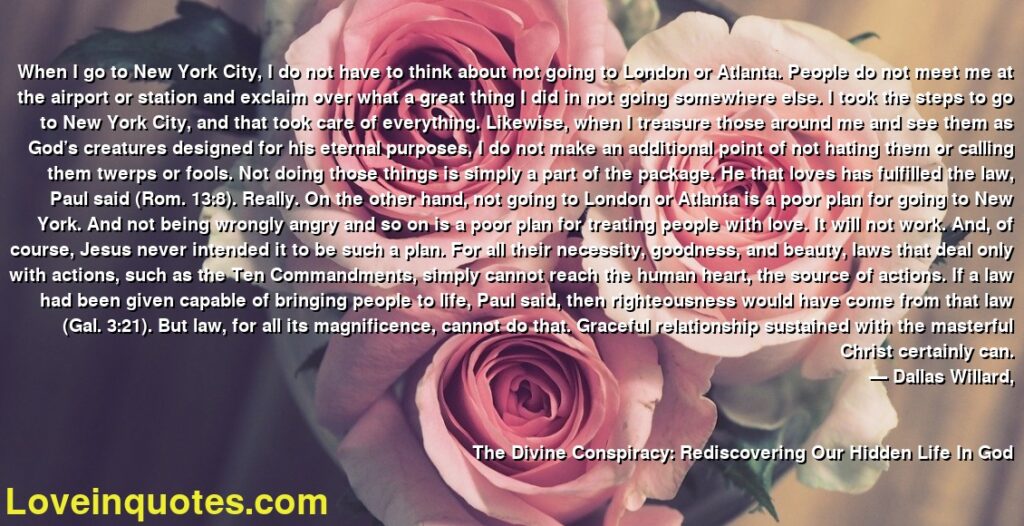 When I go to New York City, I do not have to think about not going to London or Atlanta. People do not meet me at the airport or station and exclaim over what a great thing I did in not going somewhere else. I took the steps to go to New York City, and that took care of everything. Likewise, when I treasure those around me and see them as God’s creatures designed for his eternal purposes, I do not make an additional point of not hating them or calling them twerps or fools. Not doing those things is simply a part of the package. He that loves has fulfilled the law, Paul said (Rom. 13:8). Really. On the other hand, not going to London or Atlanta is a poor plan for going to New York. And not being wrongly angry and so on is a poor plan for treating people with love. It will not work. And, of course, Jesus never intended it to be such a plan. For all their necessity, goodness, and beauty, laws that deal only with actions, such as the Ten Commandments, simply cannot reach the human heart, the source of actions. If a law had been given capable of bringing people to life, Paul said, then righteousness would have come from that law (Gal. 3:21). But law, for all its magnificence, cannot do that. Graceful relationship sustained with the masterful Christ certainly can.
― Dallas Willard,

The Divine Conspiracy: Rediscovering Our Hidden Life In God

Why is my love for you, dyed in wool?What is the hindrance to moving on?Why in love have I been made a fool?What’s been...

These fragments, these shivers of my heartAre mere lifetimes enclosed in a minute ― Zubair Ahsan, ...

Love doesn’t need consent or someone’s approval. It is as inevitable as life and death. ― Samreen Ahsan, ...