Home LoveQuotes When the gap between the world of the city and the world... 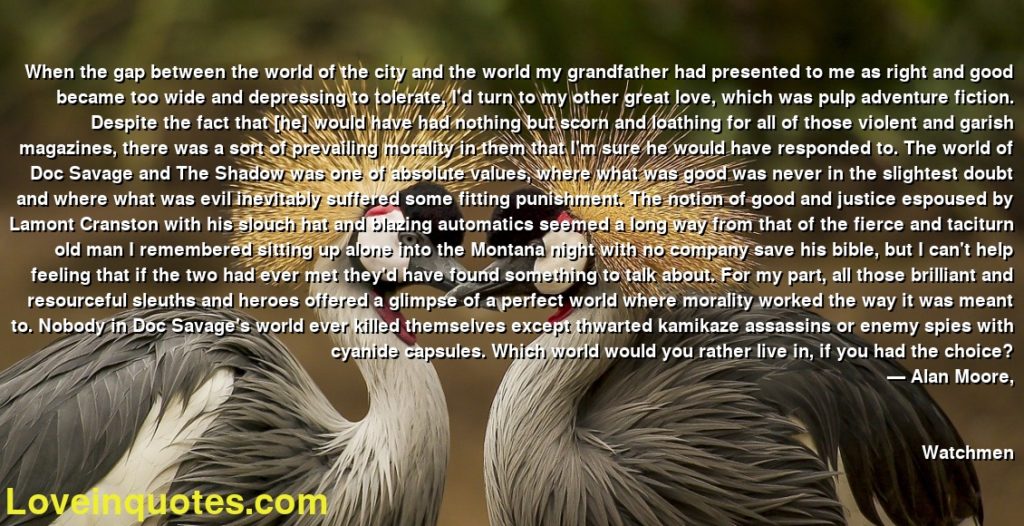 When the gap between the world of the city and the world my grandfather had presented to me as right and good became too wide and depressing to tolerate, I’d turn to my other great love, which was pulp adventure fiction. Despite the fact that [he] would have had nothing but scorn and loathing for all of those violent and garish magazines, there was a sort of prevailing morality in them that I’m sure he would have responded to. The world of Doc Savage and The Shadow was one of absolute values, where what was good was never in the slightest doubt and where what was evil inevitably suffered some fitting punishment. The notion of good and justice espoused by Lamont Cranston with his slouch hat and blazing automatics seemed a long way from that of the fierce and taciturn old man I remembered sitting up alone into the Montana night with no company save his bible, but I can’t help feeling that if the two had ever met they’d have found something to talk about. For my part, all those brilliant and resourceful sleuths and heroes offered a glimpse of a perfect world where morality worked the way it was meant to. Nobody in Doc Savage’s world ever killed themselves except thwarted kamikaze assassins or enemy spies with cyanide capsules. Which world would you rather live in, if you had the choice?
― Alan Moore,

Feelings fluctuated, changing because of circumstances and a million other factors. Love was a choice. A commitment to put someone else first, to give...

If I died, I’d expect my guy to mourn me forever, and if he tried to hook up with someone else, I’d haunt him...

Feelings fluctuated, changing because of circumstances and a million other factors....

She wasn’t easy to be around at the best of times,...

Lucien bent down and once again sifted through rock and sand,...

Feelings fluctuated, changing because of circumstances and a million other factors....